The docs here says that ‘Key assertions’ is one of the four actions in a transaction tree. However, there is no one ‘key assertion’ function or keyword in Daml. So what does this refer to? Is it any assertion involving keys, or is it a set of statements such as exerciseByKey, lookupByKey, NoSuchKey… etc?

Key assertion here refers to a negative lookupByKey. A positive key lookup is implicitly recorded as part of a fetch or exercise of a contract with the given key but we need a special primitive to record that there is no contract with a given key.

However, in practice, this is a case where the ledger model is slightly out of sync with the implementation. In the implementation, we don’t use NoSuchKey assertions but instead we have a separate LookupByKey node which can result both negative and positive assertions (fetchByKey and exerciseByKey are still recorded through regular fetch/exercise). We track that mismatch in Align Ledger Model docs to implementation · Issue #7113 · digital-asset/daml · GitHub.

So is it correct to say that the key assertion here means lookupByKey, and just that?

In the ledger model, it’s even more restrictive. It’s only a negative lookupByKey so one that returns None or in other words a NoSuchKey assertion.

Thanks @cocreature! For some reason, I am still having a hard time wrapping my head around this. Can you please point me to some code that uses this concept of ‘key assertion’?

And now let’s say we do something like exercise cid (C yourkey).

The resulting transaction in the ledger model will look something like this:

Another way of looking at this is to take a look at the transaction graph in Daml studio. As I mentioned above the implementation uses LookupByKey nodes rather than “NoSuchKey” assertions but if you mentally replace a key lookup with “not found” by “NoSuchKey” you will see the same structure: 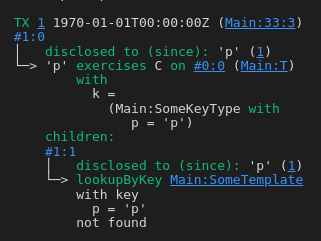